This article is part of a series of article published by the Journalism & Media Committee of the World Youth Economic Forum 2018. This article was written by Florian Stuber.

Around him, 30 young, elegantly dressed students sat in the “A1” room in the Fuyue Hotel in Shanghai. Despite the air-conditioning, the men in their suits and the women in their dresses were sweating profusely. It was shortly before lunch, but the energy in the room was as elec-trifying as the buzzing lights that shone overhead. An important discussion to solve one of modernity’s greatest challenges was at hand, a discussion regarding the impacts of oil and gas usage to the environment. This is only a part of the larger theme the delegates will debate dur-ing the World Youth Economic Forum 2018 in Shanghai, with the goal discovering how alter-native fuel, like solar, wind or hydrogen energies can satiate the world’s energy demand in an eco-friendlier way.

While the delegate dozed, a crucial group discussion took place. Despite language barriers, everyone in the room had the courage to stand in the front of the committee and to explain his or her position as the representative of a given governmental entity or private corporation. Opinions varied widely. The representatives of ExxonMobil, an American oil and gas compa-ny, explained why alternative fuels are not as good as they seem and why fossil fuels like oil should remain superior. The CEO of Coal India Limited, an Indian coal mining company, took a more balanced position, expressing the company sees the potential to use coal as the main source of global energy but simply in an efficient and eco-friendly way. The delegate of the Russian Federation expressed that her country is “very optimistic” about renewable energies. A total of fifteen different interests were presented and discussed.

At noon, the assistant director of the “Alternative Fuels” committee tapped the sleeping dele-gate on the shoulder. It was time for lunch. After the break, the committee would disperse in smaller groups to further discuss their thoughts upon the topic. Hopefully, then, the sleepy delegate will be awake. Otherwise, he will certainly miss something exciting. 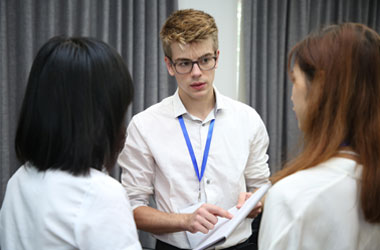